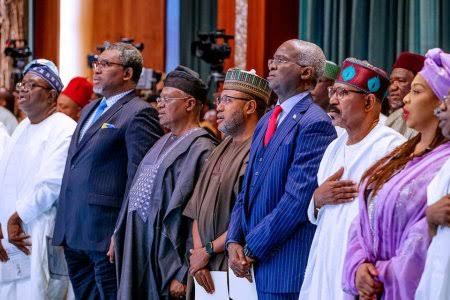 In a statement issued in Ilorin, the Kwara State capital by his media aide, Mallam Mustapha congratulated the new ministers to hit the ground running in their respective ministries towards attaining the crucial mandate of economic recovery to further proper the country to next positive level.

Mallam Mustapha particularly congratulated the Ministers of Information and Culture, Alhaji Lai Mohammed and State Transportation, Senator Ruqayat Gbemisola Saraki (GRS) on their inauguration as members of the Federal Executive Council by President Muhammad Buhari and urged them to see their appointments as a special call to serve the country.

The APC Chieftain described the caliber of individuals being appointed as capable of driving robust initiative that would navigate the next level agenda of the present administration.

Mallam Mustapha noted that the challenges ahead are enormous and demanded renewed commitment from the part of the appointed ministers to achieve the set goals in the interest of the nation.

He was of the view that the appointees would assist President Buhari to deliver on his campaign promises in every sector.

Mallam Saliu Mustapha however cautioned the new ministers against frivolous bureaucracy and other anti progressives tendencies that could be of impediment to service delivery.

The APC Stalwart therefore, lauded the reappointment of Alhaji Lai Mohammed as the Minister of Information and Culture and the appointment of Senator Ruqayat Gbemisola Saraki as the new Minister for State Transportation, describing it as a step in a right direction.

Mallam Saliu Mustapha expressed conviction in the abilities of the new Ministers from Kwara State to deliver in the interest of the country.

While congratulating the two ministers, the APC Chieftain solicited the unalloyed support of all kwarans for the new appointees to enable them recoord a resounding success in their respective official engagements.